This historic Roundtable underscores the growing understand of the vital role of mental health health promoting economic cooperation and advancing inclusive growth in the Asia-Pacific region.  The 2015 APEC theme “Building Inclusive Economies, Building a Better World” illustrates the APEC’s broad goals to attain productivity and enhance the quality of life of populations across the region.

Hosted by the Philippines Department of Health and National Center for Mental Health, in collaboration with the APEC Life Sciences Innovation Forum (LSIF) and APEC Health Working Group (HWG), the Roundtable is a vital part in Phase One of the APEC Roadmap to Promote Mental Wellness in a Healthy Asia-Pacific (APEC Roadmap) endorsed by APEC Ministers in Beijing, China in November 2014.

2015 APEC Health & Economy Ministerial Meeting Joint Statement  was a sound endorsement of the Mental Health Taskforce work so far.  As mental illness accounts for one-third of all chronic disease burden, it is a key element of socio-economic concern. In the Joint Statement, the High-Level Meeting on Health and the Economy (HLM5) “welcomed the progress of the Task Force on Mental Health in implementing the APEC Roadmap to Promote Mental Wellness in a Healthy Asia-Pacific. HLM5 further encouraged APEC members to complete their Strategic Needs Assessment on Mental Health and looks forward to the establishment of technical working groups in areas identified as of common concern, and the launch of a digital hub as an interactive resource to facilitate the establishment of partnerships to implement the Roadmap.” 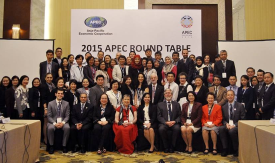