Professor Chee Ng and Ms. Julia Fraser from Asia Australia Mental Health were in Beijing 20-21 August 2014 to participate in the Asia-Pacific region’s premier economic forum.  Hosted by Peking University, APEC (Asia-Pacific Economic Cooperation) has convened a high-level workshop with senior leaders from government, academic institutions, industry, civil society not-for-profit groups and international organizations.  The focus of the meeting was to determine clear actions which can reduce the economic and societal burden of mental and substance abuse disorders in the region.

The workshop also hopes to contribute to the review and drafting of the “APEC Roadmap to Reduce the Burden of Mental Disorders (2014-2020)”.  The roadmap serves to complement the World Health Organization’s Mental Health Action Plan (2013-2020) by supporting the facilitation of best practice pilot collaborations throughout the Asia-Pacific region and was endorsed by APEC Ministers in 2013.

Further information on the APEC Roadmap, the APEC Health Working Group and APEC Life Sciences Innovation Forum can be found at www.apec.org 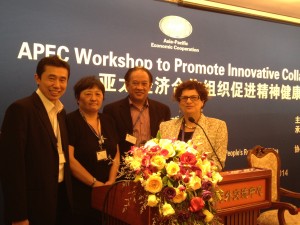